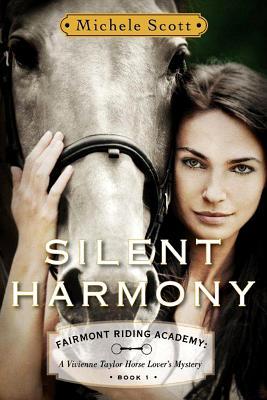 Small town seventeen-year-old Vivienne Taylor is a talented equestrian with Olympic dreams and a little something extra going on–she is also an “equine empath,” someone who has the ability to read horses’ minds and moods. When she receives a full scholarship to attend Fairmont Riding Academy, a prep school with a famous riding program, she struggles with homesickness, hazing by the school’s snooty drama queen, intense competition in the sport of three-day-eventing, and the not-altogether-unwelcome interest of a hot guy. On top of all of that the horse given to Vivienne via the scholarship is an animal that she cannot “read” or understand. When Vivienne learns that her new horse Harmony belonged to the school’s vet, who recently died in a freak accident, she senses that the horse’s aloof behavior may be the result of her witnessing this accident. But as a connection begins to unfold between Vivienne and Harmony, Vivienne begins to believe that the vet’s death was no accident at all–but rather murder–and she resolves, at considerable peril, to track down the killer.

The short version: The quick version: Good for older teens (language, sexual references) and has a lot of potential with complex characters and a well thought out mystery. If 3rd person present doesn’t bother you, you’ll probably like it better than I did.

The long version:
Silent Harmony is exactly the type of book I would have picked up when I was a kid, and even still today. But especially as a teen who thrived on the Thoroughbred series, Saddle Club, Nancy Drew, James Patterson, Dick Francis… This book immediately caught my eye because it sounded like it had the potential to be a bit of all of the above. Oh, and don’t forget to add the new trend of YA slightly supernatural or magical romance into the mix. Vivvie is gifted, she’s got boys surrounding her up to her ears, and she is entirely focused on horses. Yup, all of the above.

So admittedly I had high expectations. And in some areas, this title fell a bit short for me where in others I really loved it.

The opening chapter pulled me, in the voice was compelling, and the pacing was great. I was never bored, and never confused. Not once did the early chapters make me want to give up on the book. But then we got further in, and she arrived at her new school, and we gained new POV characters and I wanted to pull on the reins and come to a full friggin halt. While Vivvie’s POV is told first person present and done well, the contrary POV’s are told third person limited present and it made me want to scratch my eyes out. I hated it. It was completely jarring and just ugh.It nearly ruined what was otherwise a good book for me.

The other thing with this title is that it tried to be too much of the all of the above. In the end we had not enough horse activities to satisfy me ( I wanted her to compete!), not enough mystery to just be a mystery, (though it came sort of close) and a bit too much of ring-a-round-the-boyfriend. Also the language and the sexual references make me suggest this book be for older teens only.

I think there is so much potential here, and the series could end up being great. I liked the characters, I loved how complex they were, and I really liked the setting. Vivvie is a compelling main character, a smart heroine, and fun. I also hope it solves its identity crisis and it figures out what it wants its main genre to be – Teen romance, Teen mystery, or targeted at horse crazy girls. Regardless, I’d like to see the language and the older content toned down and then I think it could really have wide appeal for an even younger crowd.

So what’s the final verdict? I’d say a yellow ribbon. If the short sections of 3rd/present were cut, I’d put it at almost a blue.  If you aren’t bothered by the POV, you like mystery, horses, and romance, you’ll probably really like this book so I do suggest giving it a try.