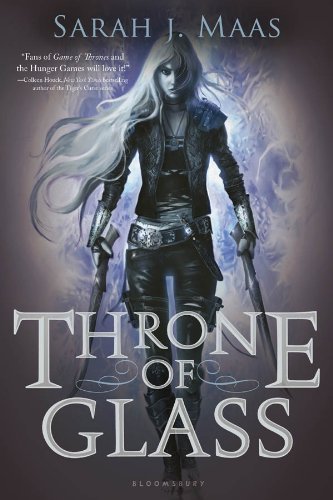 I’ve been seeing Throne of Glass everywhere (especially as twitter icons) and so when I found it at the library, I decided to check it out and I’m so glad that I did. Throne of Glass is a lot more suspense/adventure driven than romance driven, and is a nice break from the typical YA Fantasy/Romance. There’s a little bit of magic, and a little bit of romantic intrigue that I think may play a larger factor in the next book, but they definitely take a back seat to Cel’s struggle to win the contest to be the king’s champion.

I think one of the things I loved most about Throne of Glass was how the main plot was set up. Celaena has two bad choices–win the contest to get a position she really and truly doesn’t want, or be sent back to a death camp. She’s fighting for her freedom, but for the short term, freedom is just another type of prison.

Throne of glass has a relatively large cast of characters and I enjoyed most of them. The young prince, Dorian, is not what he seems at first, and he has a conscience. It remains to be seen if he’ll develop the spine to go along with it, but I liked his character a lot, though I would like to have known more about him.

Chaol, the head guard, is brooding and doesn’t trust Cel, but I loved him the longer I read. He’s worried for both Dorian and Celaena, and he has the guts to act on what he thinks is right.

There is also a foreign princess, Nehemia, and I enjoyed the intrigue and secrets surrounding her.

One thing that did confuse me at times was the time period. I really couldn’t get a firm idea of what the level of technology would equate to. They seem to wear old fashioned dresses, all though when it is prudent Celaena dons pants and shirts, they use candles for light and travel by horseback but they play games of pool and chess and cards, and have large libraries with trashy romance novels. There were other more modern touches as well, which seemed a bit out of place.

If you are looking for more books like Souls of the Stones, I think you will really like Throne of Glass. I’m looking forward to the sequel.