I know it goes against conventional branding wisdom, but one of my current projects is a steamy NA Contemporary Romance. It most definitely will not be appropriate for younger readers (But I will keep excerpts and such pg-13ish out of respect for those that follow me because they like Souls of the Stones, but perhaps aren’t as fond of the steamier NA.) 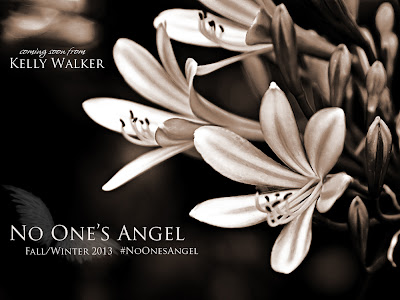 “Hey, wait,” a voice I’ve heard a million times says from the doorway behind me. I freeze, suspended somewhere in the middle of hope and heartbreak. It’s him. He’s here. I found him, but what will I say? I had it all worked out in my head, but now, for once in my life, words fail me. I can talk my way into trouble with a deaf priest, but at this moment, my lips have taken a vacation. I can’t even breathe. I want to throw my arms around him, but who throws their arms around a guy they’ve never met? Then again, who bolts across the country to meet the guy she’s never met just because she used to tell him everything from the safety of behind a computer screen. Only someone desperate.
I guess he’s grown tired of me standing in the hallway like a mute moron, facing away from him because he reaches for my arm just as I turn toward him. I don’t even mean to, I just react, jerking my arm away and pressing myself again the wall. My heart is flapping around my chest like a trapped bird, slamming itself into a windowpane because it sees safety on the other side without realizing its desperate attempts to live free will actually bring its death. I’m the stupid bird and I know it.
Somewhere beneath the panic, I register the concern on his face. He’s backed away, and his hands are up, palms outward, fingers loose. But I’m not looking at his hands. At least not anymore. While I take deep gulps of the stale hallway air, my eyes rove over him. I’m both waiting and watching, trying to reconcile what I expected with what I see. This can’t be Arion. I’ve spent more hours than I can count talking to him through the computer. If I’d been talking to a Greek-god incarnate, I think I would have known it.
His chest is bare, glistening beneath a light sheen of sweat, which I guess makes sense considering the blonde who just left. Considering how slender I am, it would be hypocritical of me to think he couldn’t possibly be the same guy who’d spent hours playing W.O.W. with me into the small hours of the night, because someone with those abs couldn’t possibly spend so many hours in a computer chair. Call me a hypocrite, because that’s exactly what I was thinking.
Honey hair falls to the base of his neck and yesterday’s stubble dots his cheek. I blink hard, trying to rein in my runaway thoughts.
“See something you like?” His voice, that teasing tone, is exactly like I remember it even though its been over a year since we talked.
I finally find my voice, at least enough to manage one word. “Arion?” I ask because I still can’t believe this is him.
His cocky smile collapses on a field of grief. “Angel?”
No ones called me that in a long time. Something stirs within me, some remembrance of who I used to be. I don’t know whether to nod or shake my head. We stand there staring at each other for a moment, and then he steps back, ushering me inside. After the unimpressive hallway, the living area we step into catches me by surprise. The gray in the hallway was drab, but Arion’s living room can only be described as wow. Grays blend with warm chocolate brown topped with splashes of black and cream. I’ve stepped into the Venti Mocha-Rich-a-chino of apartments. Like a fancy six dollar coffee, it’s worth every penny but way out of my league.